I don’t feel inspired much lately. I don’t take my camera with me very often, don’t take photos often even if I do. I don’t get a chance to travel much. This weekend though, the arrival of a friend from Toronto gave me the excuse to head into Busan. 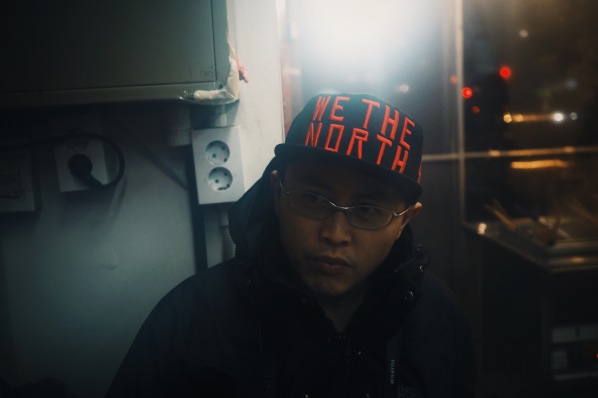 Enter Neil Ta. Well known for his roof-topping photos and also a successful wedding photographer in Toronto, he is also the manager of mutual friend Eric Kim. We known each other for years, so, when he decided to come to Korea for a trip we thought we’d take a bromantic holiday to Busan (about 4 hours by train) from Seoul.

We decided the night before our almost exactly 24 hour long trip that we would have a contest for best photo to be judged by Eric, lol. I think this was both of our ways to go on a trip and actually try hard to take some photos.

Because of the nature of the contest we both took digital cameras. Neil was using an X100S and I had an Olympus OM-D E-M1 (17mm 1.7). I don’t want to talk about cameras too much, but, I think that Olympus is probably my favorite digital camera I’ve used. I’ll mention it a little bit throughout.

Neil, who ironically (for a dude who climbs tall buildings) gets motion sick so we didn’t take too many photos on the train. A couple walking back and forth to the vending machine or whatever.

Felt great to arrive in Busan. I forgot how much I missed the smell of the ocean. I think I say this every time, on every post, about this place. It is always true though. I guess its true what they say about our sense of smell being the strongest tied to memory. Looking at the gulls and breathing in the sea air brings me back home no matter where I might be.

Busan itself has a completely different feeling than Seoul. The area we were staying in, Jagalchi (the fish market is famous) is teaming with markets, shopping, and a giant fish market. The first day after arriving late we decided to just walk around the shopping area. I don’t think I was really “in the mood” to take photos really. Was nice hang out with an old buddy though.

By this point we were teasing each other about our inability to really take a decent photo. I don’t think I was even taking many. Neil said my exposure compensation dial needs to be adjusted since it usually sits around -1. I just laughed at him struggling to take photos with the X100S that seemed to be pretty slow. Maybe it just seemed like that because the Olympus is probably the fastest camera I’ve ever used in operation. I was blown away, honestly. I don’t really get excited by cameras anymore, either.

Anyway, tired from the train ride, we did more eating and talking than shooting. Probably for the better. It was more a time to catch up than anything else.

Neil is one of the rare people in my life that is completely honest with me when it comes to photography (or anything). He doesn’t hesitate to tell me a photo is shit. I heard that a lot in the past two days. I repay in kind.

We woke up with the sun the next day in the hopes of getting to the fish market when it was opening. We kinda missed that, being the lazy idiots that we are.

We spent a couple minutes just looking at the boats and the water. We said it was because it was pretty. I think it was because we were still half asleep.

I find it a bit hard to take photos here now. They’ve all been done. Kinda like my post last week though, I figure it is okay if its been done as I can just do it again. My way.

I wanted to take a photo of this woman because she told me off the last time I tried. I usually just ask, talk a bit, but she didn’t have any of it. This was as close as I could manage. Scared of a grandmother. Sad story, I suppose.

All in all, we probably spent twenty or so minutes in the fish market before we figured out coffee was a better time had than taking photos.

As for our contest. I forgot to mention that the rules were that I had to shoot in colour, and Neil in black and white going against our normal aesthetic. I figured I would go with the theme of old women. There was no reason for this aside from I saw a lot of them.

After coffee we made our way back to Seoul. A short trip, but a fun one.

Was good to get out and shoot with a buddy. Reminded me why I loved photography in the first place.

It is this. The friends, the people you meet. One thing I realized during this trip is it doesn’t really matter at all if I take any good photos. It isn’t about that.

We headed into Myeongdong to drain the rest of our batteries and for something to do.

And that was it, we said our goodbyes. It was a fun couple of days. Neil is a great dude, and an inspiring photographer.

Above all that though, he is a good friend.

Good photographers are easy to fInd.

Good friends, not so much 😉

As for who one the contest, I’ll leave that for later 😉 Let’s say the winner is humbled, and the loser, well, owes as were the agreed upon terms, a bucket of fried chicken to be paid promptly after our next meeting.